Located near the Murghab River delta, interlaced by a system of canals and dams, the ruins of the once magnificent city of Merv still remain. In a northeastern lying region of Khurasan, some claim Merv, was founded by Alexander the Great. Further, some suggested that Merv was once the largest city in the world and was were Persian traditions and Islam first started to blend. The remnants of Merv are located in present day Turkmenistan.

Merv’s wealth and prosperity was generated, during the twelfth century, by the silk route. The silk produced in Merv was transported to Tabriz and from there reached as far as Italy since ca. 1191. By ca. 1315, however, less Mervian silk was found in distant market. Merv suffered defeating blows, which hampered the profitable trade. These blows sent Merv on a decline that it never quite recovered. 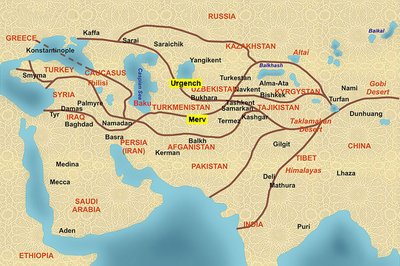 The Mongol’s, led by Genghis Khan, started a campaign against Central Asian starting in the thirteenth century. The campaign led to the sack of many cities in the area including Merv, in February 1221. Some accounts issued that approximately 1.3 million people were slaughtered by the Mongols during the siege on Merv. This number, likely an exaggeration, indicated the size of the city before its subsequent decline. How could such a wealthy, well-established, expertly fortified and heavily populated city fall so quickly to the Mongol invaders?

The Mongol’s defeated Merv through the application of six main tactics and protocols. First, Merv’s ruler Khwarazm Shah was a deficient leader. In his numerous encounters with the Mongols he always fled, leaving the city in the hands of a small garrison. The garrison proved no match for the invaders. Second, the Mongols had more men. The Secret History of the Mongols suggested that in ca. 1206 the Mongols boasted 100,000 able-bodied fighters. Third, they mastered the use of advanced siege technologies like the swing-beam catapult. This technology allowed the Mongols to overwhelm walled cities. Fourth, they used the feigned flight assault strategy. This strategy required that a small band of warriors would make a straight forward siege on the enemy. The enemy, believing this to be the whole of the force, would chase the small band. Unbeknownst to the enemy, this was part of the Mongols plan. Another larger force waited in cover to ambush and destroy the enemy in pursuit. Fifth, the Mongols practiced hashar, which referenced the harboring of prisoners of war. The prisoners lived out their days as slave laborers. This practice ensured that no Mongol energy would be wasted on setting up camp or even holding their own arrows. And sixth, the Mongols conquered because of sheer terror.

Merv never fully recovered from the Mongol attack. Today, however, Merv is a UNESCO World Heritage Site, dedicated in 1999. It is one of the best preserved cities along the Silk Route of Central Asia. Merv’s ruins, in 1987, were established as a State Historical and Cultural Park.